A yacon is a root crop, traditionally grown in South America, are becoming more popular in North America.   Yacons are related to the sunflower, Jerusalem artichoke (sunchoke) and even the dahlia.  The roots are the edible portion of the plant and grow in clusters. Yacons have a mildly sweet flavor, almost similar to a very mild apple or pear, but with a fresh crispness like celery. 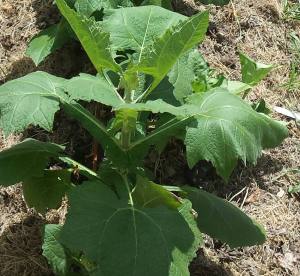 This is how we’ve learned to grow and re-grow from saved rhizomes.  (If saved correctly buy once and not have to buy again)

Yacons are very healthy for you and are nutrient dense. They contain many minerals and amino acids, including glutamine and vitamin B12. They also have inulin, which feeds bifidobacteria, which is a healthy bacterium in your gut. This is also known as lactobacteria, commonly found in yogurt, which is extremely healthful to your digestive system.

Growing yacons is quite simple, not as difficult as you may think. If successfully grown, they can achieve 4 to 15 pounds per plant. They are a heat loving plant that require at least 200 days of frost free temperatures and conditions. This includes from rhizome planting through harvest.

Yacons can be grown in any type of soil, but we chose to put ours in good leaf compost as the more nutrients in the soil the better production of any plant, whether its tolerant to bad soil or not. Yacons must be planted in full sun, and watered properly to ensure best growth. Once we planted ours we didn’t see as much growth as we wanted. We ended up putting tomato cages around them wrapped in plastic, to allow them more heat. This enhanced their growth naturally and gave us a successful crop. Knowing this, going forward we can plan ahead and wrap them as soon as we put them in the ground. You want to plant them once all chances of frost are passed. We plant them the same time we plant our tomatoes. Yacons are ready to harvest when the frost kills them. They produce a daisy like flower. When you pull them out of the ground you will see roots (tubers) and purple, circular nodules. The nodules are the rhizomes and rootstock for next year. You save the rhizomes by putting them in damp sand in a container and placed in the back of your fridge. This will keep the rhizomes plump, but not allow them to grow. You can start them indoors 2 to 3 months indoors by transplanting the rhizomes from sand to soil.

Preheat oven to 425. You need 2 cups of yacon puree. So 3 cups of yacons before you peel them should be enough. Peel yacons. Boil yacons until they are soft. Mash into puree. In mixing bowl combine 2 cups of puree, 2 eggs, 1 cup of milk, ¾ cup of brown sugar and 2 teaspoons of maple extract. Pour into pie crust or graham cracker pie crust. Bake at 425 for 15 min, reduce heat to 350 and bake for 30-40 more min. the middle will be set when its done.

We can speak at your garden event anywhere!